Greetings friends of the Illinois District!  I hope the summer months have been relaxing for you and that you and your families have been staying safe and healthy as we return to more “normal” lives.  In this second issue of “From the Vault”, I am spotlighting an early pioneer of the district, a District Champion (and International medalist) quartet from the past, as well as one of the earliest youth quartets in our history.  In addition, beginning with this issue, I will share with you a featured artifact from our archives, as I am constantly finding new treasures with each trip to the vault!  Thanks to my fellow Historical Committee members Bob Squires and Joe Sullivan for their assistance in providing information for this issue.  Enjoy!

Glenn Howard was born in Moweaqua, Illinois in 1903 and came from a musical family.  At an early age, Glenn harmonized with his brothers and at seventeen, Glenn, then of Decatur, Illinois, became interested in barbershop music.  His first quartet was called the Decatur Close Harmony 4.  In 1923, Glenn sang with The Oriole Quartet of Decatur, which consisted of Ted England, lead; Ernest Lukrafta, tenor; Floyd Mier, baritone; and Glenn Howard, bass.  The quartet entertained for several years at the Illinois State Fair, at homecomings, picnics and at theaters in the cities such as Decatur, Springfield and Clinton.

Back then, really good quartets had a “harmony man”, one who knew and could teach all four parts.  They had no written arrangements and the learning was by ear.  Therefore Glenn became the Oriole’s  recognized harmony man.  The Oriole Quartet continued for a few more years, with Glenn switching to the lead part, until Glenn formed a new quartet in Springfield, named The Capitol City Four in 1927.    In this foursome, Roy Fox took lead, Fred Raney bass, Dwight Dragoo tenor and Glenn sang baritone.

To be closer to the quartet, Glenn moved from Decatur to Springfield, taking a job in the sales department of Schulze Baking Co.  The quartet would do hour-long radio shows every Sunday, advertising Schulze baked goods.  In the 1930s, barbershop was extremely popular in central Illinois, with Springfield being a “hub.”  Glenn conceived of an idea to bring area quartet men together and organized the Illinois Harmony Club in 1937 (one year BEFORE the Society was officially formed!)  Membership was around 100 guys from Springfield, Peoria, Bloomington, Decatur, Taylorville, Canton, and Jacksonsville.  Glenn served as the organization’s first president.

At the club’s second meeting, a busload of men from Chicago came down, which included Cy Perkins, Art Bielan, and Joe Murrin.  It was at this meeting that they met Pete Buckley and the Misfits soon formed.  Inspired barbershoppers returned to Chicago and set in motion the groundwork for the Chicago #1 Chapter.  Eventually the club voted to put its membership in the newly created SPEBSQSA organization, and the fun was on!

The Society announced its first national contest to be held in Tulsa June 2 and 3, 1939.  The Capitol City Four drove over a thousand miles to get there, intending to only listen and observe.   On arrival at the headquarters hotel, however, they met O.C. Cash who asked for a song.  They harmonized a couple of numbers and to their shock Cash said, “You’re in the contest.”  The quartet did not even have costumes with them!  The Capitol City Four did compete and something happened for the first and only time in barbershop history.  The decision was so close that the judges called for a sing-off between the Bartlesville Barflies and The Capitol City Four, with the former taking the top honors in this very first of SPEBSQSA contests.

The next year, the quartet was able to sign a deal with RCA Victor in Chicago to make an album of records.   The album was made with piano and organ accompaniment and became the first Society recording and is now a collector’s item.

Glenn next sang in a quartet called The Plow City Four, and competed in New York City.  In 1942, he organized the Whiz Candy Makers, sponsored by the Beich Candy Company of Bloomington, Illinois which also competed at the international level.  Glenn sang with the quartet for three years, retiring in 1945 to become part of the audience.  Glenn held the distinction of being the first man to finish in the finals singing three different voice parts and the only person to attend EVERY Society convention from 1939 until 1991.  Glenn passed away in 1992 at the age of 89, but his legacy lives on in the district – at every fall convention, we present winners of the novice quartet contest with the “Glenn Howard Award.” 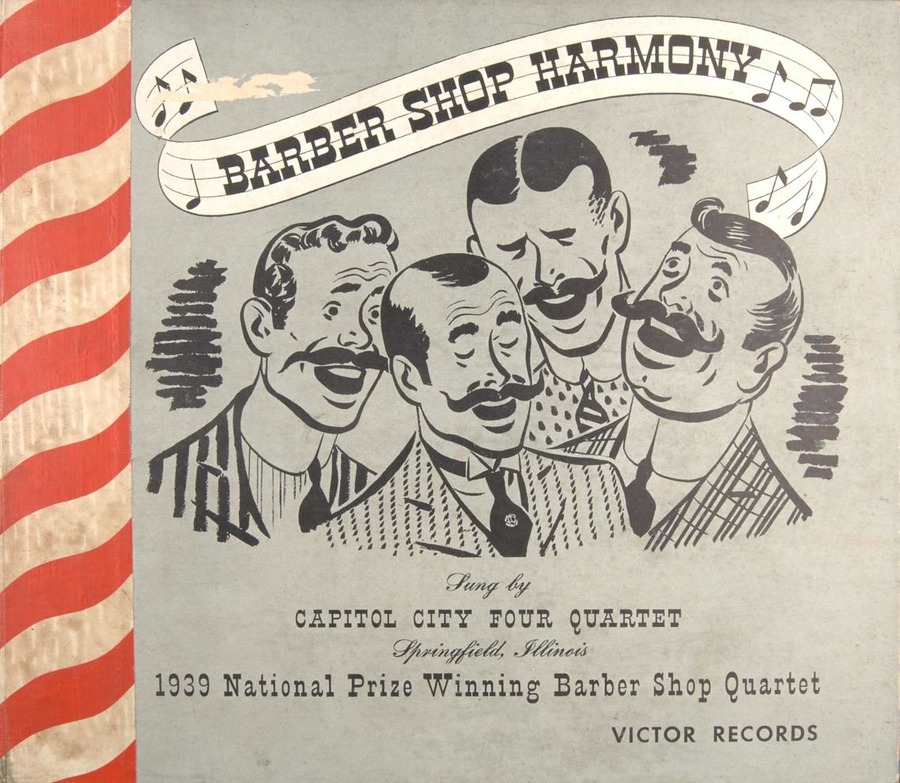 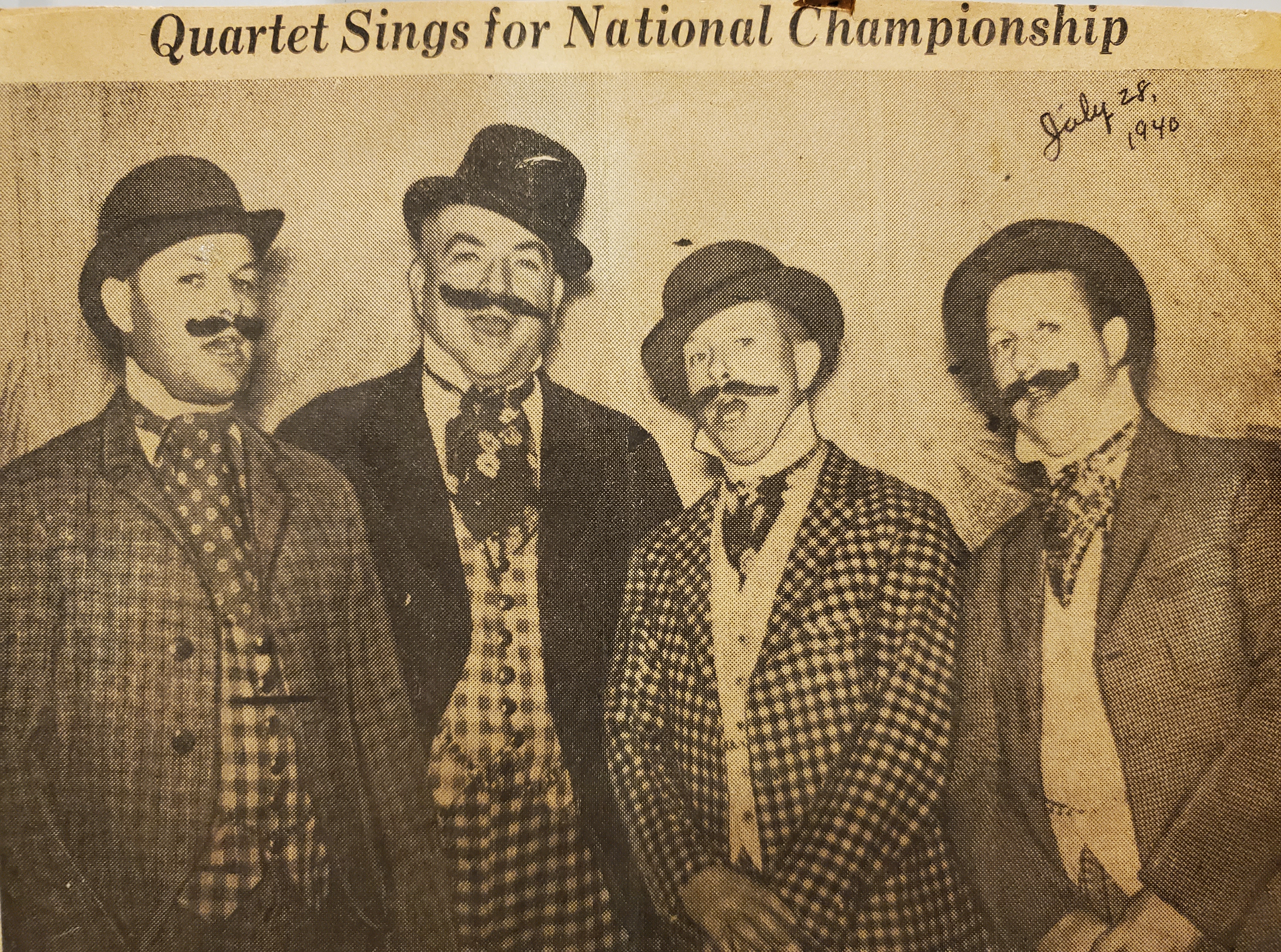 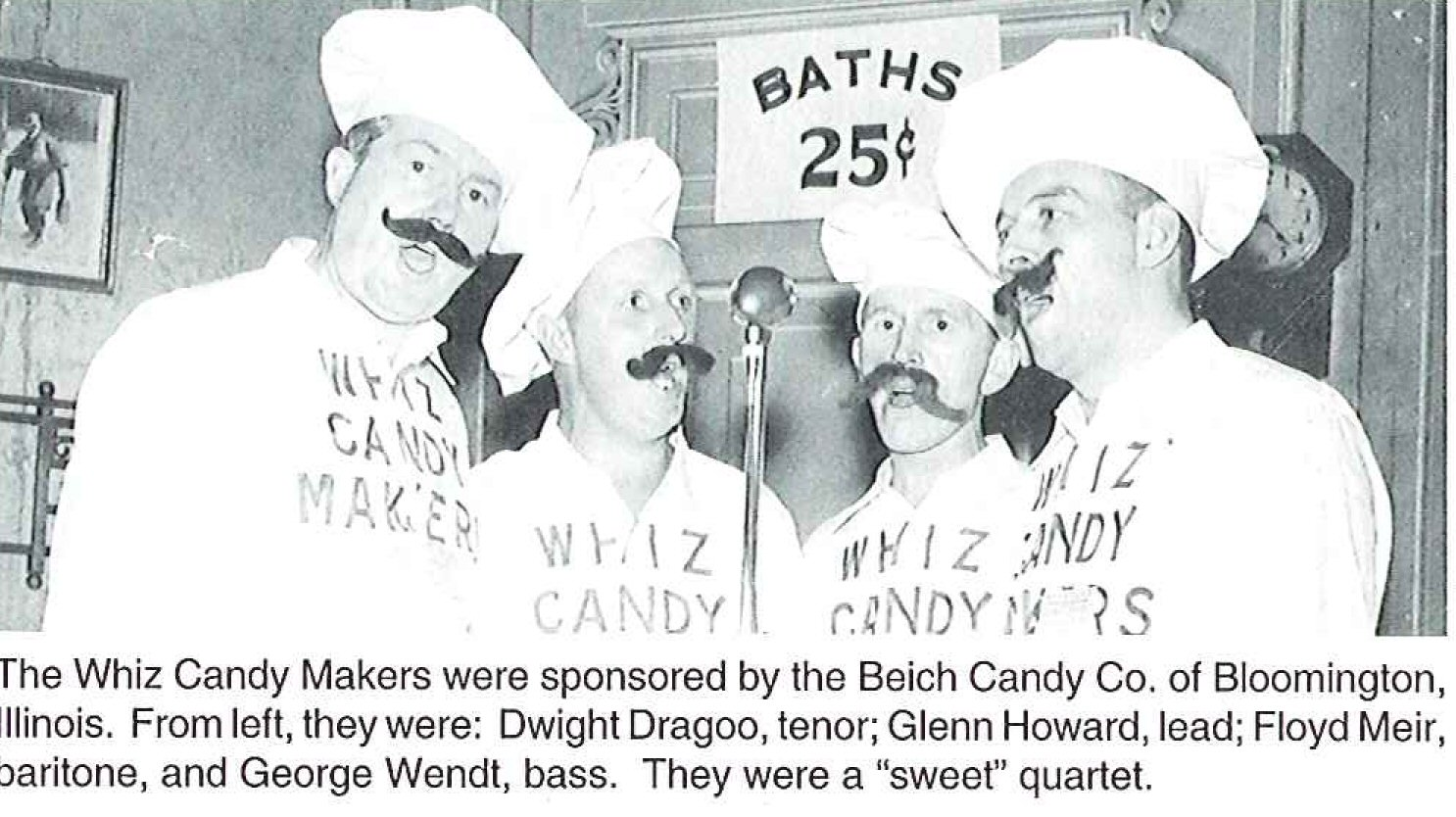 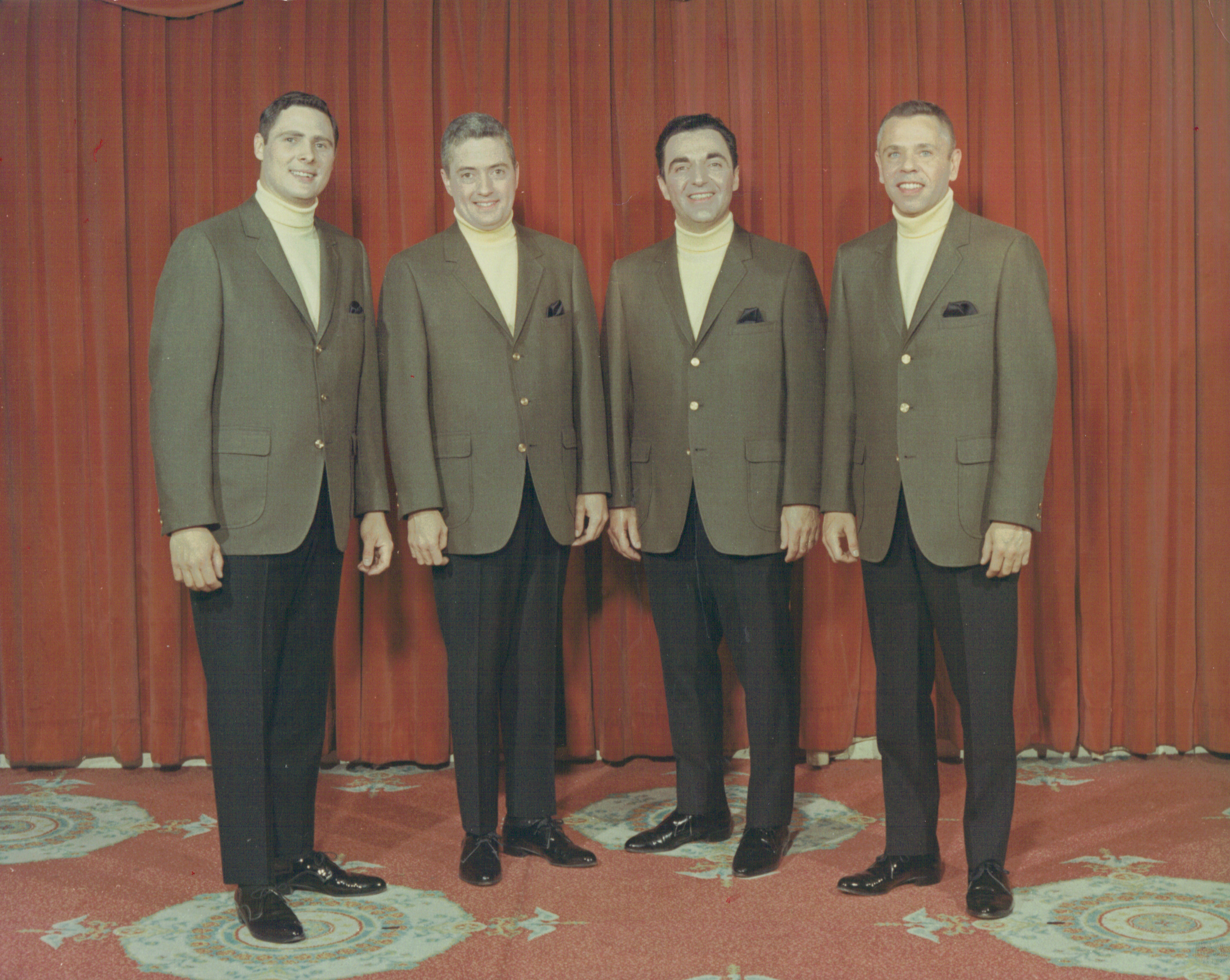 This issue’s QCA spotlight is on Avant Garde, our 1967 Illinois District champion quartet, representing the Skokie Valley, County Line, Rockford, and Arlington Heights Chapters.  Lead Joe Warren was previously a district champ in 1962 with The Imposters.   Baritone Joe Sullivan had recently left The Four Renegades.  After The Imposters disbanded, Joe S. teamed up with Joe W. to form Avant Garde in 1965.  Friends Dick Reed and Bob Meredith joined them on tenor and bass, respectively.  The quartet won the district in 1967 and went on to place as high as 5th in the International competition at Cincinnati in 1968.

Bob sang with the quartet until 1968, at which time the quartet selected Doug Miller to replace him.  The quartet again qualified to represent Illinois in 1969 at St. Louis, where once again they received a 5th place medalist finish.  Afterwards, Joe Sullivan left the quartet and it was decided to switch Doug to replace him on bari and bring in Dave Brady on bass.  Since Dave was in the service in 1970, the quartet opted not to compete, but did so the following year, where they finished 7th in New Orleans, after which the quartet disbanded.  Sadly, we’ve lost Dick Reed, Joe Warren, and Bob Meredith, but three of the members (Joe Sullivan, Doug Miller, and Dave Brady) still survive today.   The Illinois District salutes our 1967 District Champions – Avant Garde!

This photo shows our 1946 District champion & 1949 International champion quartet The Mid-States Four made up of Bob Mack (tenor), Marty Mendro (lead), Art Gracey (bass), and Forry Haynes (bari) as they serenade Jane Russell and Bob Hope on the Hollywood set of the 1952 film, “Son of Paleface.”  The comedy western also featured Roy Rogers and his infamous horse, Trigger. 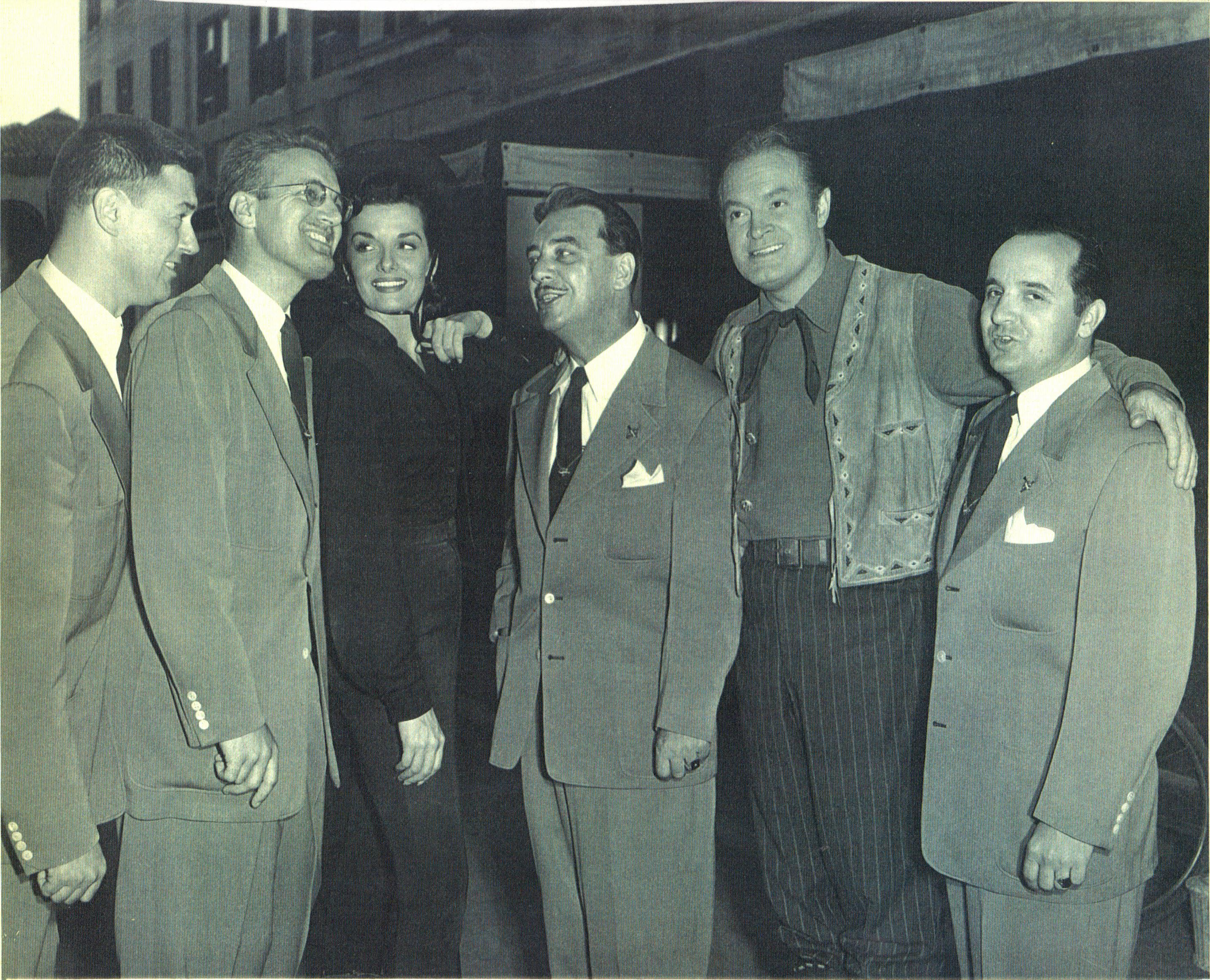 This issue’s artifact is a special one – the program from the very first SPEBSQSA quartet contest held in the state!  It was held on Sunday, October 31, 1943, in the high school auditorium at Galesburg, under the sponsorship of the Illinois Association of Chapters, and under the direct auspices of the Galesburg chapter.  Tom Williams of Galesburg acted as emcee.  The judges were Roy Fox, Springfield; Harold Gray of Rock Island, and Leo Ives of the national champion, Four Harmonizers of Chicago.  The Harmony Kings of Springfield were crowned as the 1943-44 state champions.  The Gipps-Amberlin Four of Peoria, second;  The Morgan County Four of Jacksonville, third; and the Town Four of Cicero, fourth.  In addition, the Corn Belt Chorus, under the direction of John Hanson, performed, as did the chorus of the Galesburg chapter, the Barberettes of Peoria, and a chorus from the Cicero-Berwyn chapter.  The “Sing for Victory” phrase at the bottom of the program demonstrates the state’s patriotic fervor, as the country was fighting the Second World War at the time.

Long before the concept of “Youth in Harmony” was popular, Illinois could boast of one of the earliest young quartets ever to compete on the International stage.  The Four Flushers were composed of four students from Oak Park/River Forest High School.  The original members included David Vose singing bass (later with Jack Borden), Peter Peck, bari; David MacKain, lead; and Tom Williams, tenor.   They formed in 1947 with the help of their music teacher, Edna Woods, and competed in Rock Island and qualified for the National Contest in Buffalo, NY.  On June 12, 1949, The Four Flushers placed 19th out of 40 quartets.  They were the youngest quartet of all competitors. 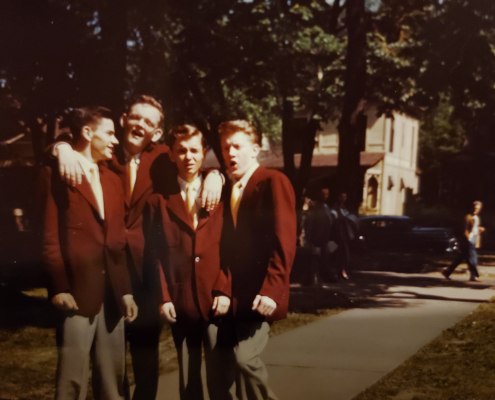