Greetings to all members of the Illinois District!   Since our fall convention was cancelled, I did not get a chance to share some of the “gems” from our district archives with you.  And why wait until just once a year to view some of these?   This is the first of what I hope to be a regular feature that connects you, the barbershopper, with some of the interesting stories and artifacts from our shared past. In this inaugural issue, I would like to showcase two legendary district quartets who shared anniversaries in 2020 as well as the two surviving members from those groups – Bob Park and Jim Stahly.  Enjoy and Keep the Whole World Singing!

Lead of the 1960 District Champs – The Four Barons 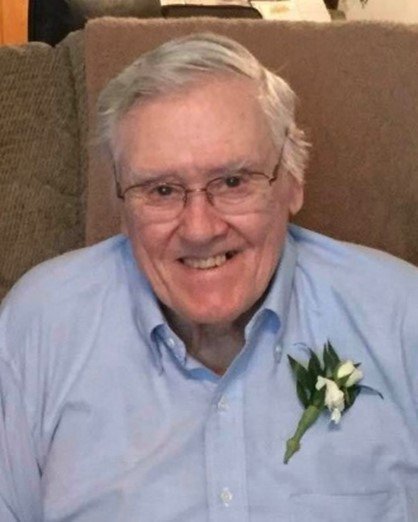 Robert D. Park was born in 1928 in Chestnut, IL. He married Marjorie Asbury Sept. 19, 1948. They have four children (Cheryl, Larry, Dave, and Susan), four grandchildren and eight great-grandchildren. He retired from his garage door business in 1990 after working for Beer Nuts,Inc., in the early years of the company. Bob began singing barbershop in 1954, joining the Bloomington chorus. He sang lead in several quartets, including 1960 district champs The Four
Barons. He sang with The Boot-N-Aires, which competed in international in 1962, and later with Phase IV. Bob was the original lead of The Ideals, a Bloomington quartet that went on to win the district title in 1970. Bass Chuck Lewis was also bass of The Four Barons. 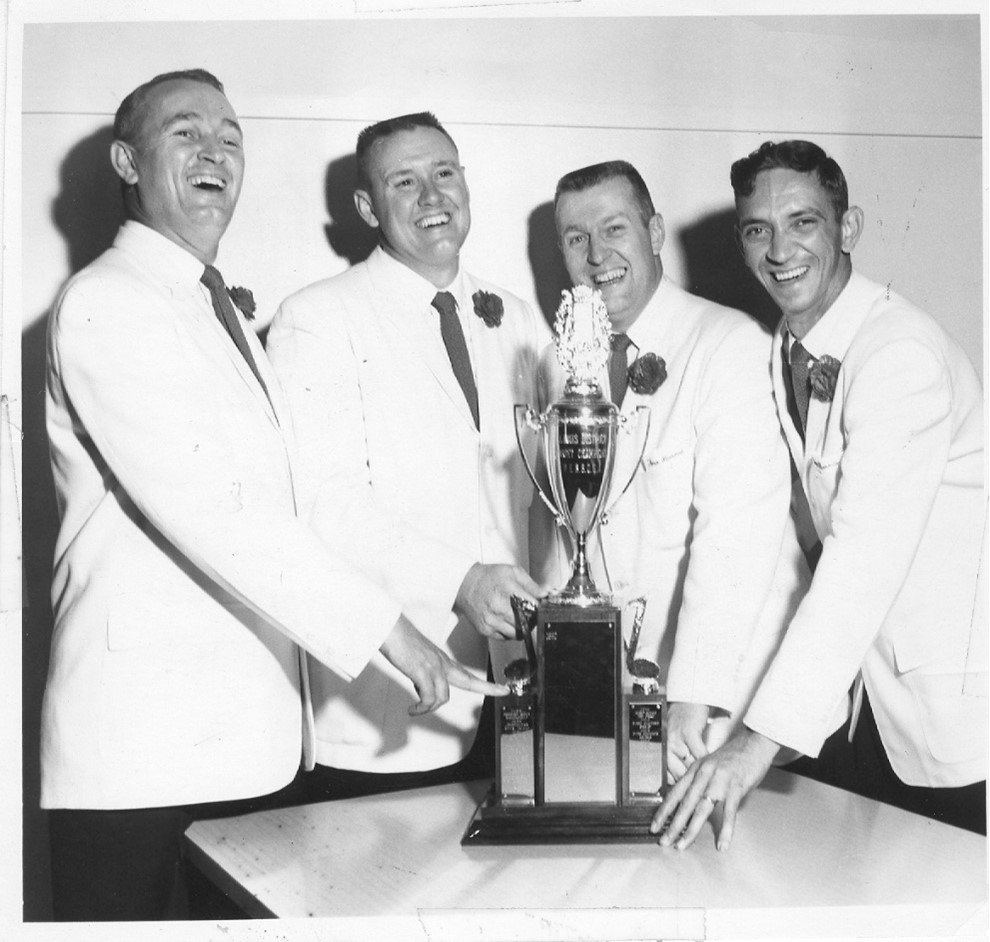 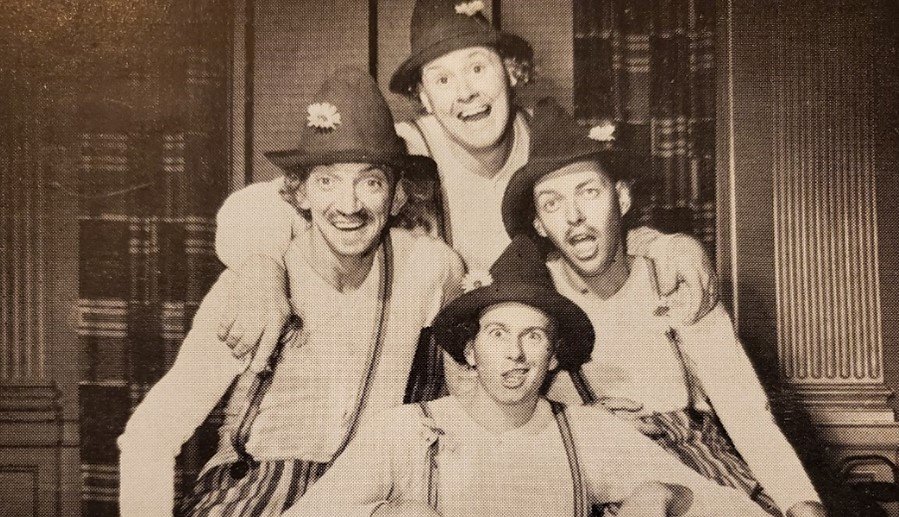 The Boot-N-Aires, circa early 1960s. The foursome included Bob on lead, Jack Aldridge on bari, Don Nevins on tenor, and Chuck Lewis on bass. Bob, Jack, and Chuck were also original members of The Ideals. 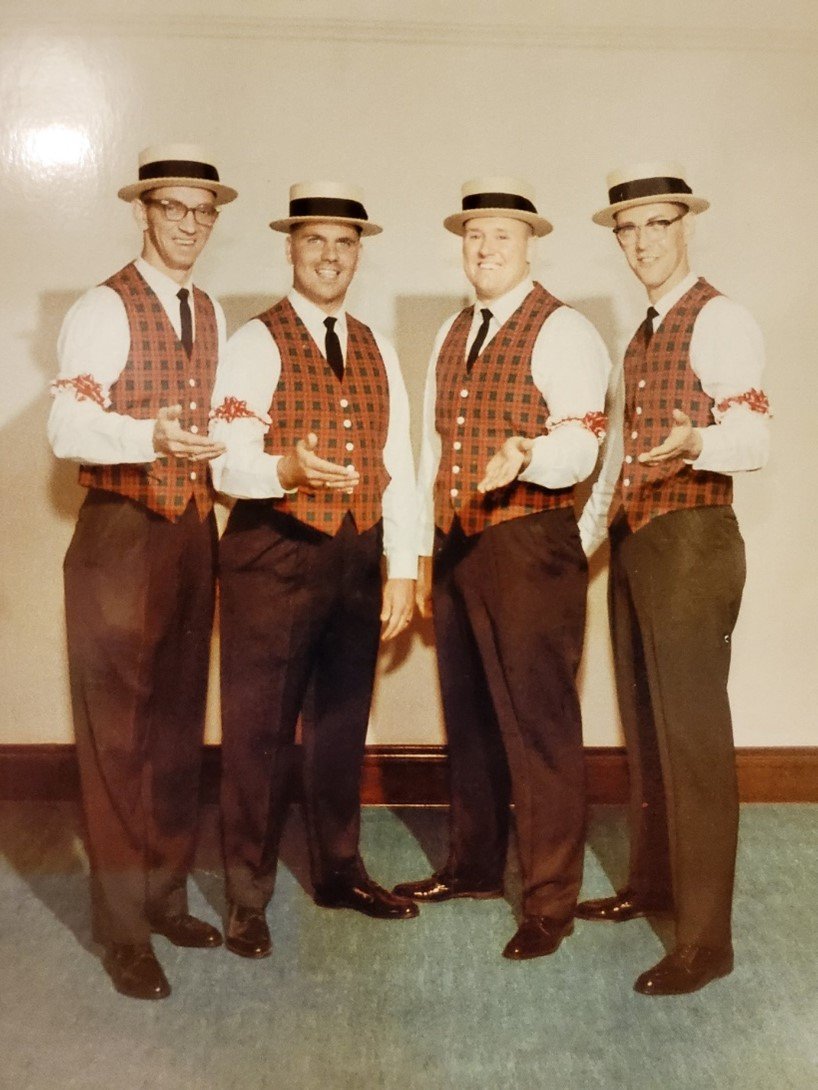 Bob (second from right) in the original 1966 version of The Ideals.  With him are Chuck Lewis (bass), Jim Stahly (tenor), and Jack Aldridge (bari). 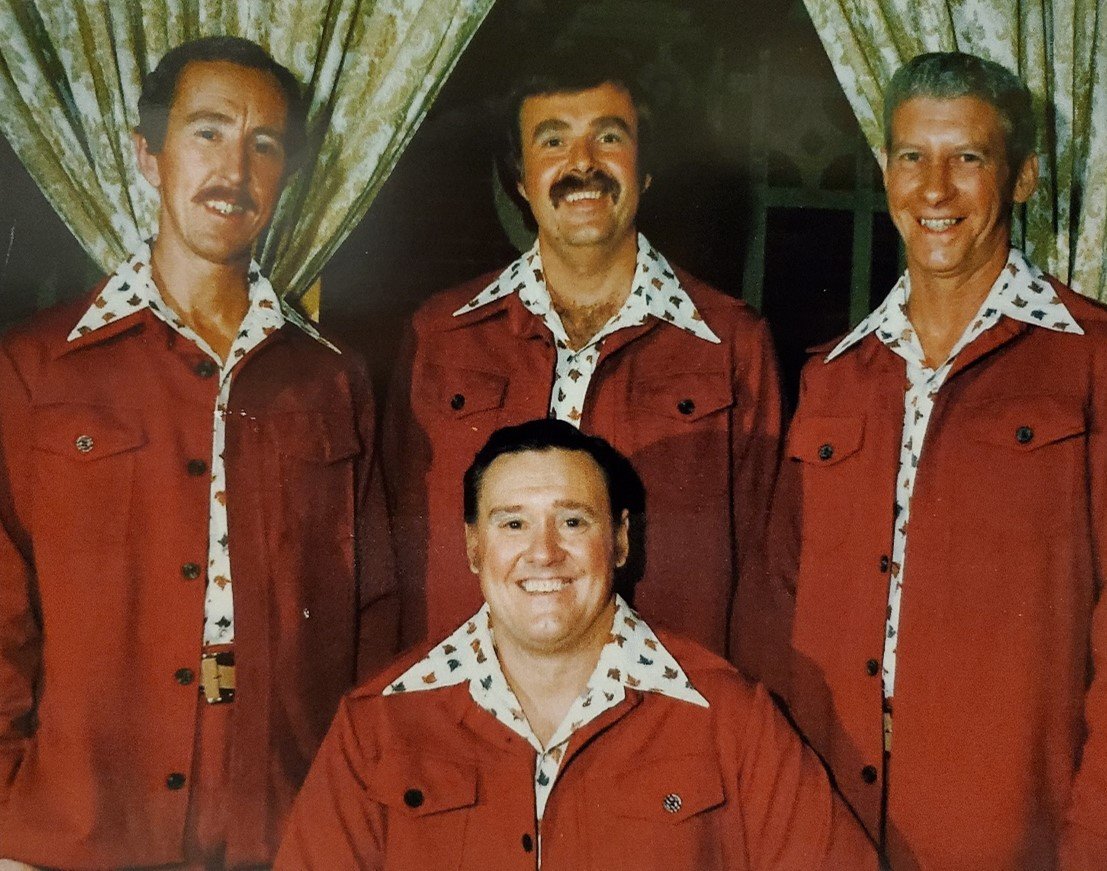 Bob (seated) as he appeared with his quartet, Phase IV.  The quartet came in 6th in the fall of 1975.  With Bob are Ralph Johnson (tenor), Dick Johnson (bari) and Ray Wahl (bass).

Tenor of the 1970 District Champs – The Ideals 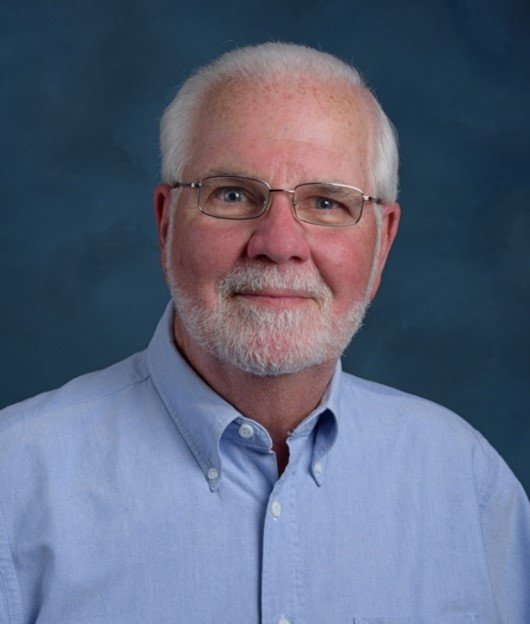 Jim Stahly is a Bloomington, IL native, born in 1940. His father, long-time district secretary Forrest Stahly, joined the Bloomington Chapter during its first year in 1942. He is retired from State Farm and lives in Normal with his wife Kathy. Jim has a son, Kathy has a daughter. They have two grandchildren. Jim joined the Society while still in school in 1957, right after the chorus’ third-place international finish at Los Angeles. He sang with The HappyTimers, The Ideals, The Harmonic Plague, Sound Design and Two Young, Too Old (Bloomington quartets) and Fifth Avenue and Seniors.com (Naples, FL quartets). He directed the Bloomington Chapter 1982-1993, served as Illinois District VP-PR & Communications 1998-2000 (started the district’s first electronic newsletter), and was an arrangement judge 1982-1989.

During their six-year run, The Ideals traveled the country performing for State Farm (all four were employees) when the company announced new regional office locations. Asked to perform at the 1990 district convention to commemorate their 20th anniversary as champs, they kept singing another four years until Jack Aldridge died. Bass Chuck Lewis also sang bass with Bob Park in the 1960 champs, The Four Barons. 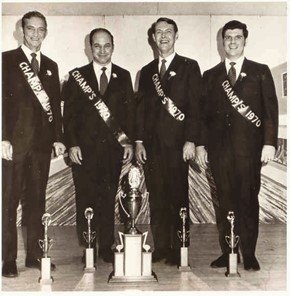 The Ideals pose after winning the district championship in 1970.  They represented the Bloomington Chapter.  From left to right are Chuck Lewis (bass), Al Draper (bari), Jack Aldridge (lead), and Jim Stahly (tenor). 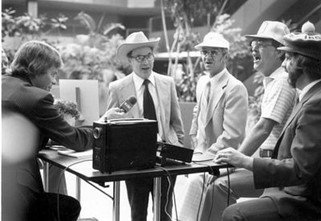 The Ideals singing for 25th anniversary of Don Munson’s Morning Show on WJBC Radio, Bloomington.  His show was broadcast live from State Farm Corporate Headquarters atrium, and the quartet was invited to perform. 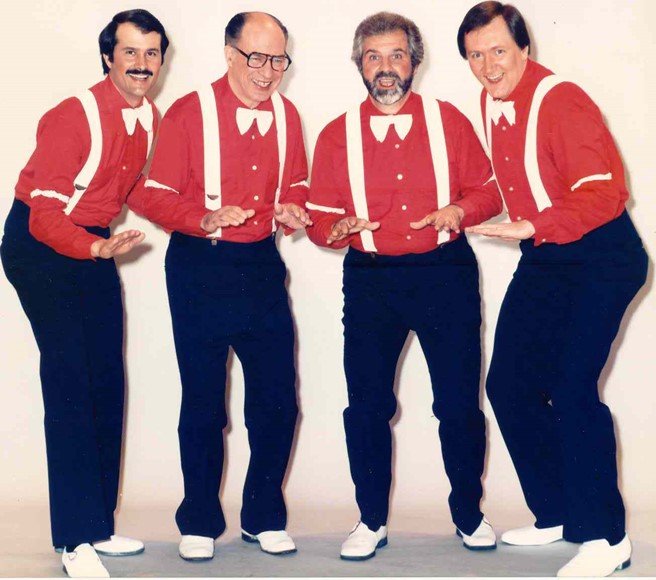 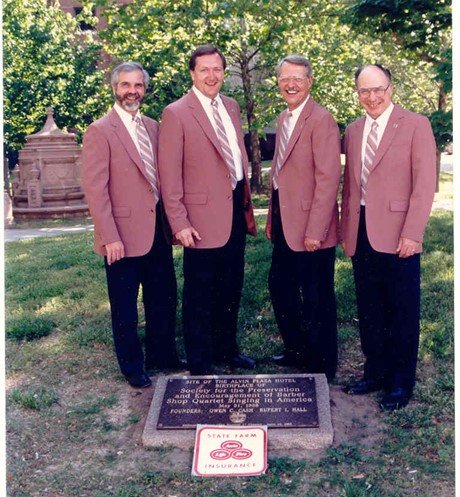 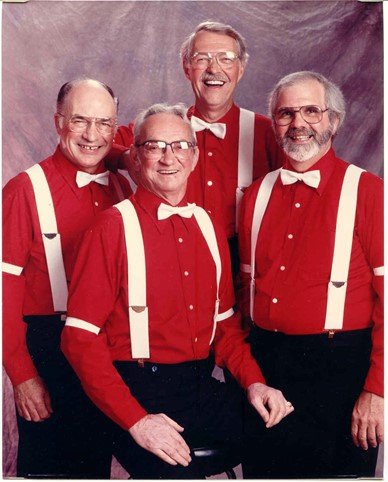 The Ideals as they appeared in 1990 on the occasion of their 20th anniversary.  From left to right are Draper, Lewis, Aldridge, and Stahly.

Bill Hanna (from the popular animated production team Hanna/Barbera, whose work included “The Flintstones” , “The Yogi Bear Show”, and “The Jetsons” series) was actually a barbershopper who recorded The Ideals singing for animated State Farm safety commercials in the early 1970s. 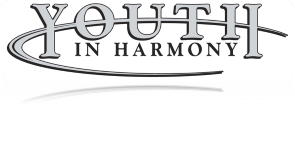 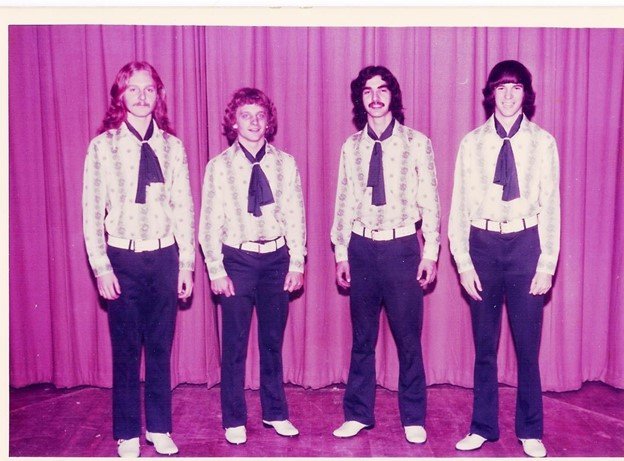 Back in 1971, a quartet from Centennial High School joined the Illini Statesmen Chapter in Champaign Illinois. Rob Campbell and John Muir (the two on the right) are now 50-year members.