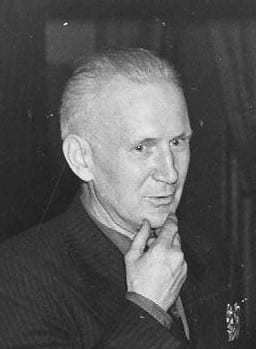 [T]he Twenty-Fourth QCA Music Man Award is hereby presented to John Hanson to recognize his pioneering contributions to barbershop chapters, quartets and choruses during the formative years of  the barbershop movement in Illinois.

John Hanson was a born showman.  After a brief stint as a semi-pro baseball player, the Peoria native was in vaudeville with Jim Jordan who would become radio’s popular Fibber McGee.  In fact, John’s first barbershop quartet was The Templeton Four, with Jim on lead and John on bass.  In 1941, he sang with The Capitol City Four, placing fifth in international competition with a show-stopping rendition of Shine.  He also was bass in Peoria’s Gipps-Amberlin Four, which placed fourth in 1944.

At age 39 (1934), after helping stage a minstrel show in Peoria, the 40 men stayed together as the Klose Harmony Klub.  In 1941, after learning of the barbershop society, the Peoria chapter formed with John as director.   When Bloomington formed in 1942, John was named director there, as well.  Many Central Illinois communities formed chapters and wanted John to lead them.

His popularity led to formation of the Corn Belt Chorus.  Since he arranged much of the music, he taught all of his choruses the same songs.  When any chapter had a show, all chapters would send men to perform as the Corn Belt Chorus.  John’s dream was to put a thousand men on stage at once, according to his letter to O.C. Cash, a Society founder and personal friend of Hanson’s.  It was not unusual to stage several hundred for a show.  A 1946 newspaper photo documents a 325-man chorus singing in Peoria.

Hanson’s active role in spreading barbershop across the state was recognized by the Society, and he was asked to serve on the international board (1942-43).  He became the first official Society emcee for international contests.

Born June 24, 1895, in Peoria, John died in Bloomington in 1954, where he is buried.  His late daughter, Betty Oliver, sang tenor in the Sweet Adelines champion quartet, The Pitch Pipers.

Because he led choruses in so many cities (17 at the highest count), and because of his ability to arrange and teach, many Illinois quartets benefited from his talents.

The QCA is extremely proud to acknowledge Hanson as the 2015 Music Man winner.

A Brief History of Barbershop Chapters in Illinois