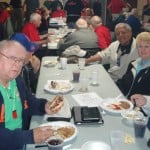 A day of food, fun, and four-part harmony were featured June 10th as the men of the recently merged Will-Cook chapter continued what has become one of the longest running traditions in the Illinois District.

The late Rod Hupach, a former member of the Joliet chapter, along with his wife, Arlene, and his sons, started an event that was originally billed as a casual get-together of members of the Joliet chapter and their wives for an outdoor picnic feast of various and sundry food items with the feature course consisting of Rod’s famous home-made bratwurst. 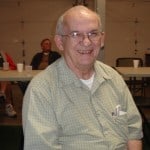 The summer gatherings began back in the late 1970s and year by year grew and expanded beyond the chapter to include members from the Chicagoland area and the District’s (at that time) Northern Division.

What would a barbershop outing be without lots of singing? Rod always found a way to invite guest show quartets to fill out the evening. But each and every year, the highlight of the evening was Rod’s pick-up quartet contest. Every man, upon registering, dropped his name in one (or two, three or four) voice part containers and at the appropriate time those names were called out to form a myriad of quartets to compete for prizes. Rod always took great pride in creating the hand made awards for the top quartets. However, the most coveted prize was the dubious “Outhouse Award,” presented to the last place quartet.

For many years the picnic and singing were held in the backyard of Rod’s home in the Crest Hill area of Joliet. Rain or shine, the festivities continued. Rod even provided a roaring fire, tarpaulin for quartet protection and spotlights to flood the quartet area. History has it that a Bash was never cancelled due to weather, although a sudden thunderstorm and lightening caused a serious delay one year. 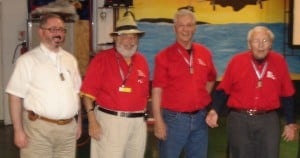 Rod passed away in 2002 shortly after receiving the ABE Award, our district highest honor. This years’ Brat Bash was the 38th annual event attended by members of the DuPage Valley, Chicagoland West Suburban (West Towns) and host, Will-Cook chapters. Guests enjoyed performances by quartets Sound Investment and Sound Design 2.0. Members from the Aurora, Chicago Metro, Northbrook and Lake County were also in attendance.

Photos accompanying this article were taken by Will-Cook member, Earl Meseth.  See the full set of photos at the Illinois District’s Facebook page.