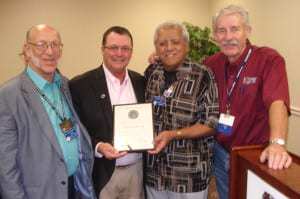 [T]he newest chapter of the Illinois District is now official.

District President Jeff Bowyer presented officers of the new Will-Cook chapter, the Knights of Harmony, with their charter at the fall convention in Bloomington. Chapter President Lou Gonzalez, Immediate Past President Earl Meseth, and Musical Director Bill Kerschbaum represented the chapter at the ceremony, which is a merger of the Joliet and South Cook chapters.

Joliet and South Cook were both formed in the 1950s and have long traditions in the Illinois District. Members have been part of four district quartet champions: Sundowners (1965), Friends (1980), Chicago Chord of Trade (1985), and Chordiac Arrest (1987).

All four quartets made their mark in International competition.  The Sundowners medaled six times, including second-place finishes in 1970 and 1971; Friends were three-time semi-finalists between 1980 and ’82; Chicago Chord of Trade was a four-time finalist, with fifth and third-place finishes in 1987 and ’88; and Chordiac Arrest, another four-time finalist with a pair of fifth-place medals in 1988 and ’89.

The new chorus is already continuing that tradition with recent performances before games of the Windy City Thunderbolts and at a breakfast honoring organizers of Honor Flight Chicago.