[A] great contest venue, strong performances in the quartet and chorus contests, and the 45th anniversary reunion of one of the Illinois District’s most influential quartet champions, Grandma’s Boys, made for a memorable convention weekend September 27-29 in Bloomington. 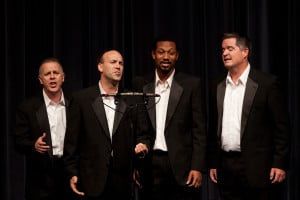 Seventeen quartets crossed the stage Friday night in the preliminary round, and observers agreed this was one of the strongest fields in recent memory. A score of 64.8% was required to qualify for the final round, and the ten qualifiers were an exciting mix of veteran quartets (the Committee, Take Note, Q’d Up, Ringtime, True Blue) and newcomers (Chronicle, Synergy, Bases Loaded, Economies of Scale, Relative Harmony).

Click here for the official scoresheets for the quartet semi-finals and finals.

In the end, Chronicle, featuring now-three-time district quartet champs Don Deegan and Steve Davis, ran away with the quartet trophy, finishing with 76.4%, a score that would qualify for the International competition. John Davis and Donovan Davis round out the foursome, who scored higher in the finals but made a real impact with their set in the semis, “Tell My Father” and “A Band of Brothers”. 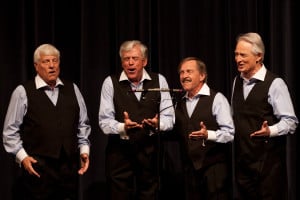 Their debut performance raises the exciting possibility that Illinois could have at least three representatives — Chronicle, Velvet Hammer, and After Hours — at the International Quartet Competition in Las Vegas next July.

Take Note, with Rick Anthoney now handling the tenor part for the quartet, placed fourth and will represent the Illinois District at the International Seniors Quartet Competition in January.  (Click here for the official Seniors preliminaries scoresheet.) Q’d Up, singing as well as they ever have, finished fifth. 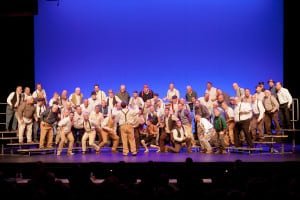 The chorus contest was as close as Illinois has ever seen, as Bloomington’s Sound of Illinois captured the Plateau 5-A Championship and the automatic bid to the International chorus contest by a mere two points, 993 (82.8%) to 991 (82.6%), over the 2013 Illinois District Chorus Champions, the New Tradition Chorus from Northbrook.

Picking a winner was tough, and the judges had no easy task in scoring the differences between two excellent performances. The New Tradition’s score may well earn them a wild card slot in Las Vegas next July, but we will have to wait on the results of other district contests. 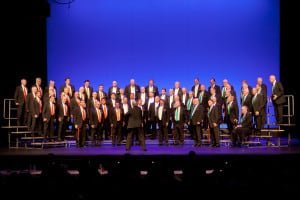 The Sounds of Harmony from Belleville made an impressive showing, taking the Plateau 4-A Championship and 2nd Place overall, while Lake County’s Brotherhood of Harmony took 3rd Place and the Plateau 3-A title. The Coles County Chorus placed 4th with a nod to the Andy Griffith Show, just ahead of the 5th Place 2nd City Chorus from Rockford. The Rock River Valley Chorus from Sterling-Rock Falls finished ahead of Springfield and Elgin for the Plateau 2-A championship.

Now, observant readers who have looked at the official contest scoresheet will notice that we apparently overlooked Bloomington and Chicagoland West Suburban in the chorus rankings.  That deserves a word of explanation.

Since 2007, the district chorus champion is ineligible to repeat as champ the two years following.  Since the Sound of Illinois and West Towns were the 2012 and 2011 champions, they competed only for their plateau championships and an international qualifying score.

Be sure to check the Illinois District photo gallery as we will be posting pictures from several top-notch photographers who freely share their work after our conventions, a real blessing to choruses and quartets (not to mention webmasters–Ed.) who have access to fantastic shots of the groups on stage.

If you haven’t already, be sure to check out the Illinois District’s Facebook page and Twitter feed. It is often easier and faster for us to post information quickly to social media sites, especially during a competition.

A special thanks to Greg Grey and all of the volunteers from the Sound of Illinois who helped coordinate things at the DoubleTree Hotel and the Bloomington Center for the Performing Arts. It’s difficult enough to pull off a successful convention, but it would be impossible without the help of volunteers on site, and the Illinois District board deeply appreciates their help.

Christmas by the Fireside

Christmas by the Fireside

Will-Cook Gets Its Charter
Scroll to top