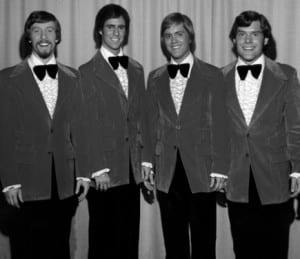 Jay Giallombardo, John Miller, Hank Brandt and Jeff Calhoun were there to celebrate the 45th anniversary of winning the district championship (think about that for a minute–45 years!) and hosted the President’s Afterglow Saturday night.

John Miller also did a wonderful job as the MC during the chorus competition Saturday night.  And it was worth the price of admission to see Kevin Hughes, lead of the 2013 International 5th Place Medalist quartet Forefront, singing tags with the Boys in the lobby of the DoubleTree Convention Center.