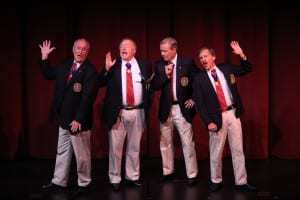 [T]he 25th Anniversary Reunion of our 1988 International Quartet Champions, Chiefs of Staff, was more than worth the price of admission for those in the audience at the 2013 Illinois District Spring Convention.

A more detailed convention report will follow, but in the interest of timeliness, we’ll say that those who saw and heard the Chiefs in their return to the Illinois District stage quickly found that the quartet still has the emotional power and command of the stage that carried them to the gold in San Antonio.

Here is a quick scoring summary until official scoresheets are posted.  Quartets:

The winner of the Gene McNish Award as the Illinois District’s 2013 Small Chorus Champions is the Brotherhood of Harmony (Lake County chapter).

Illinois District in the News