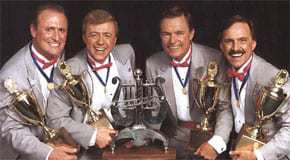 In other words, come to Peoria April 12-14 for the 25th anniversary reunion of the 1988 International Champions, Chiefs of Staff.

It’s your opportunity to greet, hear, and congratulate again our 1988 champs. The Chiefs will host a special hospitality room at the Illinois District’s Spring Convention as they prepare for the Society’s big 75th anniversary party and AIC show this summer in Toronto.

We in Illinois are in for a rare treat, because we get to hear them first!

Some history to set the stage: The Chiefs of Staff won the championship on July 4th, 1988 in San Antonio during the Society’s 50th anniversary convention. They were the last recipients of the original International Quartet (Landino) Trophy. (Chuck, a successful graphic designer, created the design for the new Hugh Ingraham Trophy that was presented to the champs the following year.)

It began during a picnic in the fall of 1983. Don Bagley got the quartet bug again during the Seattle International and approached Chuck Sisson. They found that south side Irishman tenor Tim McShane was available and sang a few tags with lead—soon to be baritone—Dick Kingdon in the Illinois District hospitality room at the 1984 Saint Louis International. The foursome was set. 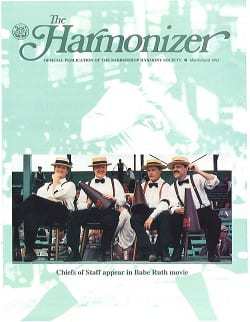 They decided that the sound was pretty good and stage presence help was needed. They worked with George Gipp (Cincinnati Kids and Chicago Chord of Trade). They also enlisted the help of sound and interpretation coaches Jay Giallombardo and Ken Buckner, and used the top arrangers of the day: David Wright, Greg Lyne, Buzz Haeger, and, of course, Jay Giallombardo.  Musically, the foundation was solid.

The Chiefs of Staff produced three LPs:  Tribute, Solid Gold, and Memories. They were best known for their renditions of Sam The Accordion Man; Ma, She’s Makin’ Eyes At Me; Brother Can You Spare a Dime; It’s a Great Day For the Irish (from their ground-breaking leprechaun set at International); Kiss Me One More Time; Lonesome, That’s All, and What Kind of Fool Am I?

For more background on the quartet, see the 25th Anniversary Quartet page at the Association of International Champions website. And make plans to join us in Peoria April 12th through 14th to hear the Chiefs of Staff in person once again!