News
You are here: Home1 / News2 / Education3 / IDAH pumps up the valiant few 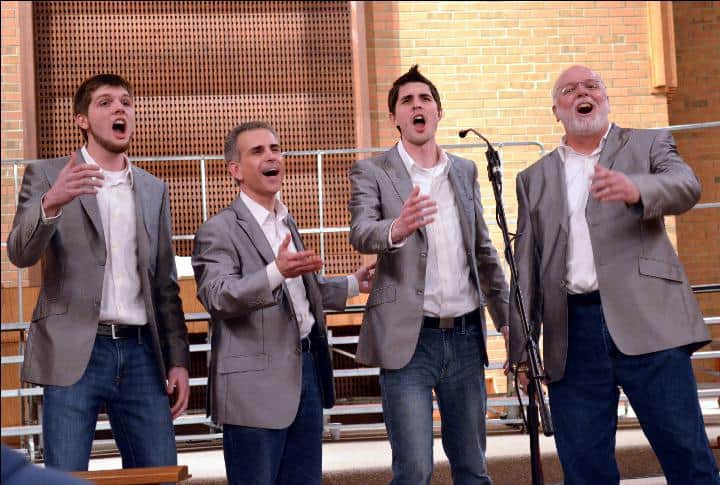 [T]here are 41 listed quartets in the Illinois District, and there are probably that many more floating around unregistered. Yet only nine took advantage of some intense coaching at the Feb. 9th Illinois District Academy of Harmony (IDAH). Somebody’s missing out.

In addition to these nine quartets, about 40 other guys worked their way through a series of musical courses designed to enhance their barbershop experiences. About 30 years ago, the first IDAH started up in Champaign and drew nearly 300 participants. Somebody’s missing out. 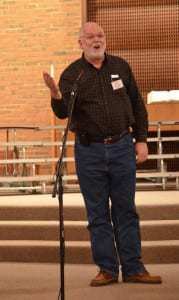 Yes, times change, district numbers are down, and the economy has put a lot of people’s hobby plans on hold. But why haven’t more of us taken advantage of the talents inside and outside of the district to help us improve, promote, and expand barbershop harmony as a musical artform? Why are Don Smit, Bob Squires, and Tom Woodall along with District President Jeff Bowyer busting their pitchpipes to assemble a top-notch school and staff with diminishing returns from the district membership? Enough of the head scratching – on to the positives.

In past years, I’ve been able to float around and absorb all the good things taking place in the IDAH sessions and in the quartet coaching moments. This year I participated with one of the quartets in the intense coaching sessions. Let me tell you, there is nothing that will energize and elevate the quality of the quartet experience than focused coaching from some of the nicest and most knowledgeable men in the Society. 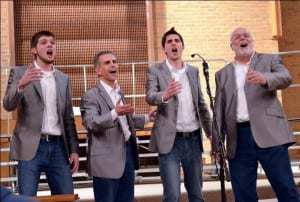 First, those men who attended in solo capacity were offered four different courses of study. The day started out with Jay Giallombardo challenging the men to become better singers. A full 90 minute session with Jay doesn’t come around very often, but some smart IDAH students were able to take advantage of his vast experience and knowledge.

Following Jay came another 90 minute session, this time with Wayne Wright, Tom Woodall, Bob Squires, and Kyle Kitzmiller – all official contest judges – who demonstrated what the judging system is all about in a course entitled “What Are Those Judges Thinking?”  They showed video footage of a quartet and chorus performing while each had an overhead projector demonstrating how they scored the performance. Trust me, there is more nuance to judging than we non-judges can imagine.

After a lunch provided by the ladies of the First United Methodist Church of Champaign, students rejoined for their third session for a dose of music theory in a course entitled “Want to Learn a bit about Music?”  This course was designed to sharpen a singer’s knowledge of what makes music work — the technicalities of tones and intervals and harmonics – all that stuff that makes our style of music ring, when it’s done right.

To wrap up the afternoon, students moved to their last course, this one taught by Kyle Kitzmiller and entitled “How Can I Make the Song Come to Life?” If you’ve ever wondered how the top quartets and choruses work through a performance plan, the process probably starts something like what Kyle presented. Even before the notes and words comes a philosophy, an agreement on the song writer’s and song arranger’s artistic intent. Tell me that a chapter chorus won’t profit from that kind of pre-singing preparation. Some chapters now have that tool.

So, what were the quartets doing while all this was going on? Getting immersed in quartetting, what else?  Here’s a listing of the quartets who saw a good deal (and got back a $50 rebate for doing so):

Several of these quartets got the opportunity to sing before the rest of the student body, each striving to put into practice the advice they had accumulated that day (some of them also squeezed in an extra coaching session the night before).

Here are the experts who devoted six hours of their time to helping them improve: 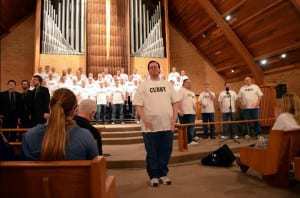 After a superb evening meal, everyone took a few moments to relax and get ready for the evening show. And what a show it was. The evening featured past district champs and international semi-finalists After Hours, current district champs Velvet Hammer, and an exciting preview of Bloomington’s upcoming chapter show featuring songs from famous animations. Concluding the show was an all-too-short set from international semi-finalists Premium Blend.

For the other thousand or so of you Illinois barbershoppers who, for whatever reason, couldn’t commit to the date, don’t think that the IDAH committee isn’t trying to put together the best musical school with the most opportunities in a tight timeframe, all for you. Next year, probably in February, plan on taking advantage of what these guys will put together – all for you. Don’t pass it up.

The Harmony Platoon Wants You
Scroll to top