Thanks to the in house support of the Eastern Illinois University Music Department and Student Union Building support staff, the event was extremely successful. More than a dozen Coles County Chorus members spent nearly 12 hours each in hosting, riser and sound system set up and hauling, registration, singing/guiding and clean up.

It was dark (early in the morning) when some of the YIH staff members drove past the display on the EIU campus. (Note: Click on the images for full sized versions.)

The girls filled the stage

The evening show was free to the public and 700 people packed the Grand Ball Room to listen as the students performed two songs they learned throughout the day. Here the 190 voice Girls Chorus performs (“Blue Skies” and “I Don’t Know Why I Love You Like I Do”) while the boys listen after having performed ….”Hello Mary Lou” and “Ya Gotta Know How to Love”.

Becky was the clinician for the girls and was indeed a “fireball” of energy. Even during the breaks she found a way to teach the girls short little fun drills and song segments. The quartet was especially focused on making it a meaningful day for the girls and they did just that.

The 60-man Boys Chorus performed under the direction of Clinician, James Estes (Music Specialist from the Barbershop Harmony Society – Nashville, TN). The boys sang well and had fun. 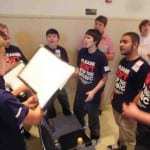 Even during the breaks, it wasn’t uncommon to see small pockets of singers, harmonizing on their own.

It is not surprising that they all sing with the International Championship Ambassadors of Harmony chorus from St. Charles, MO. Their work with the boys during the day and their outstanding performance on the evening show brought them a standing ovation (and loud screams from the high school girls!).

HOW GOOD WAS IT?

The post event evaluation from the teachers saw an average of 6.7/7.0 and they all seemed excited about the potential benefits for their own school programs. More than 90% of the students said they want to return next year – October 21, 2013 has already been established as the date – and more than 80% said the YIH event was Very Good or Outstanding. 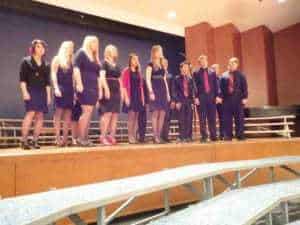 Juliane Sharp is the vocal music guru at Charleston HS. Since arriving on campus four years ago, she has developed a program that would be the envy of most schools. It seems like she has everyone singing.

This year, she brought nearly 50 students and her Advance Chamber Ensemble performed on the evening show…without her direction. The group performed a diverse Michael Jackson Medley with numerous solos, intricate rhythms and harmonies that truly entertained the audience. You would have thought Michael was there …. in person.

EVEN THE TEACHERS SANG 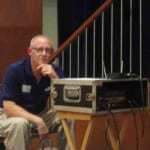 Though he couldn’t attend all day, Tim Woodall, the district’s VP of Chorus Director Development, spent time coaching a quartet, working the sound system and he had the honor of directing the vocal music teachers (supplemented by a few CCC men) in a Joe Liles SATB arrangement of “Keep the Whole World Singing”. Students enjoyed hearing their teachers sing barbershop harmony.

AT THE NEXT LEVEL 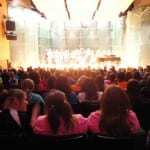 Dr. Richard Rossi directs several Eastern Illinois University vocal and instrumental groups. He is well known thoughout the mid-west and very much liked on campus and in the community. He invited the YIH students to listen to a special personal mini-concert by his Mixed Chorus. They performed in English, Latin, both a cappella and with accompaniment. One piece featured whole tone scale segments sung by 16 different parts. The program concluded with a graduate student from Korea, doing the directing. It was humbling to see/hear the talent of experienced musicians. 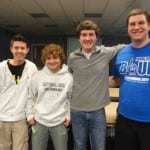 At each YIH Festival, professors from the EIU Music Department encourage some of their prospective teachers to come and watch the YIH happenings and to attend a one hour presentation. This year, a Power Point presentation was given on the history of barbershop singing. Some DVD tracks of the Portland, Oregon International Chorus Contest (July, 2012) were shown. An impromptu tag session saw instructor, Tom Woodall (CCC) , teaching a tag to four class volunteers.

Anthony Morrison (3rd from left) sang with the Coles County Chorus in high school and now attends EIU in the Music Department. He “volunteered” three classmates to try a tag (“When I Leave the World Behind”).

Guess who sang the Lead part? You’re right — the shortest man, but the ensemble locked and rang a few chords, much to their enjoyment and the entertainment of the other 25 class attendees.

THE REST OF THE STORY

Paul Karraker, a 25 year member, former President and BOTY of the Coles County Chorus, died suddenly last December. It was interesting to note that his two grandchildren (Jenny and Zach Karraker from Shelbyville) attended YIH and their father was in the audience for the evening show.

Though they didn’t perform on the show, three high school quartets (two from Charleston HS and one from East Richland HS) received one hour coaching sessions at YIH.

Ashley Giberson directs the Vocal Music program at Unity HS in Tolono. The school has a reputation of encouraging a cappella singing and this year, for the first time, they were represented at YIH with more than 30 students attending.

Two schools had just one attendee, but they were rather special. Andrew Sullender (Tuscola) has been visiting the CCC for several weeks, and Graham Haven (Lincoln Magnet School- Springfield) is the son of Roseann Haven (bass singer in Trading Places). His father passed away a few years ago, but was an avid barbershopper with a couple of AOH chorus gold medals.

That’s it for this year. If you’d like to learn more about barbershop in general and the Coles County Chorus (meets each Tuesday night at 7 PM in the First Presbyterian Church…Mattoon) in particular, follow us on Facebook or on Twitter.