CSLT student body
[W]hile we may be members of a singing society, we depend on our chapters to give us the framework for a variety of quality singing experiences. That means a chapter needs a few good men to do the grunt work to sustain chapter operations. They’re called officers. 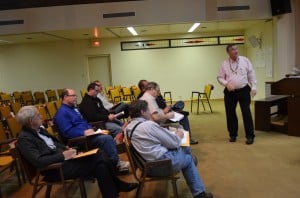 About 40 of them from several chapters throughout Illinois met in Charleston last Saturday, Nov. 3, for the annual Chapter Support and Leadership Training (CSLT). Thanks to the efforts of Phil Rolfs, as registration and activities planner, and to Tom Woodall, as facilities coordinator, these men received intense training and refreshment in key chapter administrative duties.

Four training modules took place throughout the day. Don Fuson (a Kansas City native and recently in the district as international representative to our fall convention) instructed the presidents in their duties. Illinois District Secretary Mike Isely handled the myriad of data chapter secretaries need to keep in order. District Treasurer Dave Cowan crunched numbers with treasurers, reminding them of the numerous reports they need to file to keep chapters on the right side of the law. Hugo Fuegon met with those responsible for membership, and his class contained a few men who just wanted to become more knowledgeable about attracting singers.

Each group met in three separate sessions with the last one reserved for a joint meeting between all officer groups. In between, a couple of general sessions were held so that men could put away things administrative and attend to things musical. While group singing wasn’t as prominent as in past CSLT/Chapter Officer Training Seminar (COTS) venues, tags abounded, thanks to the efforts of Hugo (whose memory of obscure, totally non-barbershop tags is becoming legendary) and retiring district president Mike Bagby.

While the single day event is a far departure from the old Friday-Saturday-Sunday COTS of decades ago, the energy combined with the seriousness of the task facing each of these chapter officers points to more versatile and forward-thinking chapters in Illinois. From the low price to the excellent facilities (and noon meal) to the quality instructors — attending a CSLT ought to be a priority for every chapter board.

What a great program idea!
Scroll to top