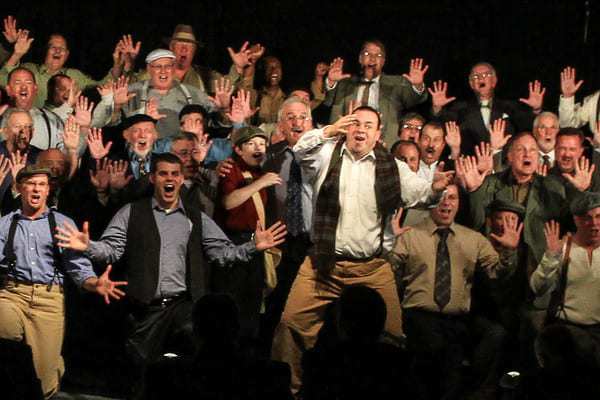 Sound of Illinois’ “Oliver” medley
[T]he Illinois District’s Fall 2012 chorus contest promised to be a good one, and it certainly lived up to expectations.  The New Tradition Chorus, with Jay Giallombardo back at the helm for the last twelve months, was eager to unseat the boys from Bloomington and end the Sound of Illinois‘ five-year run as the district’s entry at the international chorus competition.  (Click the images to enlarge.)

And then there was the Coles County Barbershop Chorus, which mildly surprised everyone in the spring–including themselves–with a 72.2 average mark, its best competition score ever.  Would they take another step up in class and challenge the big boys?

When the dust settled, the Sound of Illinois successfully defended its spot atop the Illinois District with an average score of 83.8, breaking the 1,000-point mark from the six-judge panel with a total of 1,006.  But New Tradition served notice that it’s on the rise, scoring an 82.7 average, which was good enough to earn a wild card invitation to the 2013 International Contest in Toronto.

Coles County, which lost nearly a quarter of the men expected to compete in Springfield to unexpected personal and work commitments in the two weeks leading up to the contest, placed third with 69.7.  Rounding out the top five were Lake County’s Brotherhood of Harmony at 66.7 and the West Towns Chorus, with a clever “shipwreck” package, at 66.4.

A celebrity panel selected by the contest hosts from the Springfield Chapter awarded the the MECA (Most Entertaining Chorus Award) for Large Chorus and Small Chorus, respectively, to Bloomington and Coles County.

Click here to view the official contest scoresheet (link opens PDF document).  Congratulations to all the competing choruses, and we look forward to an entertaining and exciting spring convention next April!

See photos of all the competing quartets and choruses, plus pictures of the action behind the scenes at the convention, at the Illinois District Photo Gallery.