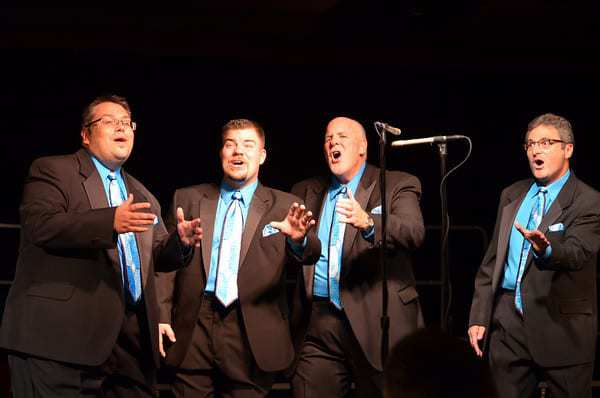 Velvet Hammer: 2012 Champs
[T]he Illinois District quartet championship seemed to be up for grabs this year with at least half a dozen quartets having a legitimate shot at the title.  The prognosticators were right, as only four points separated the average scores of the top five quartets in what turned out to be a much closer contest than the district has seen in recent years.  (Click pictures to enlarge.)

Some were in the medals last fall or in the spring, like Bloomington’s Sound Opportunity, the Committee from Bloomington and Springfield, Coles County’s RingTime, Lake County’s Q’d Up, and Take Note from Northbrook.

There was talk about the newcomers Velvet Hammer, featuring lead and bass from perennial contender tsunami. And then came word that a 2011 International Quarterfinalist from the Land O’ Lakes District, Rooftop Rhythm, was eligible to compete for the crown in Illinois.

At the end of the final found, it was the newcomers, Velvet Hammer (Max Power Stevenson, Chris Weber, Greg Martin, and John Dorgan), earning the crown with an average score of 74.5. Rounding out the medalist ranks were Rooftop Rhythm (73.1), Sound Opportunity (71.1), RingTime (70.5), and Take Note (70.5).

Take Note will also represent Illinois in the Barbershop Harmony Society’s Seniors Quartet Competition at the Mid-Winter Convention. The novice quartet championship went to 74 and a Quarter, who debuted on the contest stage with a very respectable score of 62.1.

74 and a Quarter: Novice Champs

The retiring 2011 champions, Waldorf Hair Company, went out in style.  They put on a hilarious swan set that featured a guest appearance by Tim Beutel of the 2010 champs, After Hours, who “auditioned” for Terry Ludwig’s tenor spot, and a mic cable “malfunction” that caused some friction between WHC’s bass and bari, Bret Reinthaler and Craig Ahlgrim.

See photos of all the competing quartets and choruses, plus pictures of the action behind the scenes at the convention, at the Illinois District Photo Gallery.

Thanks from the new district champs
Scroll to top